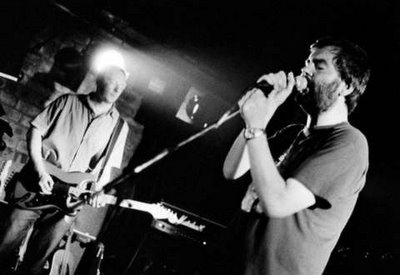 Glaswegian duo Arab Strap are an acquired taste. Their alcohol-sodden love songs are delivered in Aidan Moffat’s thick brogue, accompanied by Malcolm Middleton’s tense, minimal guitar hooks. While The Last Romance doesn’t quite lay the pair’s gloomy reputation to rest, a few rays of sunshine have been allowed to creep into the smoke-wreathed bar that Arab Strap call home. Overall The Last Romance is more compact and more energetic than its predecessors, and increased attention to the collaborative process has resulted in a new complexity. Despite these progressions, the sense of late night, last beer dramas still remains. "Sometimes there’s nothing sexier than knowing you’re doomed," groans Moffat on ‘Don’t Ask Me To Dance,’ one of the many Arab Strap songs proving that misery makes good company.

'Teardrops' – The Winter Ship [She Puts Out Records]

Septet The Winter Ship, originally from country Victoria, are now firmly based in inner city Melbourne. They craft rich, warm, sad songs; part Dirty Three, part Silver Ray, part Not Drowning Waving; which taken in their entirety are heart-rendingly beautiful. ‘Teardrops’ is their new single, and displays a vocal dexterity that was underplayed on the band’s two preceding EP releases. The cinematic fragility of bonus track ‘Mirrors Reprise’, with its quavering strings weaving around a hesitant piano, is the clear stand-out.

A Stolen Season (to translate its title) is the third album from Gallic chanteuse Françoiz Breut, who with her sultry yet vulnerable persona, her velvet-smooth voice, and an exotic presence thanks to her predominantly French delivery, is the Edith Piaf of her generation. Like its predecessors, Une Saison Volée sees Breut interpreting the works of other artists in classic style, combining smoky warmth and icy beauty with aching torch songs and moody rock. Despite its nods to the likes of Serge Gainsbourg, this is a timeless and exquisite CD.

Properly speaking this is only the second studio album from Sydney sextet Decoder Ring, given that their breakthrough CD of last year was a soundtrack; albeit the soundtrack to Summersault, one of the most successful Australian films so far this century. On Fractions the band display their genre-blurring virtuosity by deftly mixing power chords, sweet vocals, evocative soundscapes and electro-pop melodies. Guest vocals by Art of Fighting’s Ollie Brown on the restrained ‘Traffic’ suggest Decoder Ring have developed a newfound awareness for the possibilities of collaboration, while overall the album possesses a new confidence, typified by a sense of spaciousness, an opening up of their previously sometimes introspective song structures. From the dark and driving beats of ‘451’ to the cinematic synth-pop of the title track, Fractions is an exquisite triumph.

Road to Rouen is the sound of a band in decline. The playfulness of earlier Supergrass albums has been replaced by a sombre solemnity, and while I can’t fault the band for embracing a more mature sound, this new direction appears to have cost the English quartet their originality. Forced attempts at quirkiness (typified by the jarring ‘Coffee in the Pot’) sit uneasily with the likes of the slow, Beatles-esque ‘Sad Girl’ or the middle-of-the-road opener ‘Tales of Endurance’. If Supergrass do manage to survive the crises of creativity that Road to Rouen represents, I can’t see the album holding a prominent place in their back catalogue in years to come.

The seventh studio album in 14 years from instrumental trio Dirty Three features, for the first time in the band’s career, vocals, as well as a broad swathe of instruments: violin, bass, bouzouki, even bagpipes. Chan Marshall, aka Cat Power, sings on ‘Great Waves’, while Sally Timms (of alt.country band The Mekons) provides subdued vocals buried deep within the mix of ‘Feral’. Despite this progression, and the fact that the songs on Cinder are considerably shorter and tighter than Dirty Three are want to present, the band’s sound remains distinctly identifiable. The focal point is still the mournful and cinematic interaction between violin, drums and guitar. The band’s fondness for improvisation still occasionally results in self-indulgence, but for the most part Cinder is a rich and rewarding aural experience.

A concept album about a day in the life of residents in an outer London housing estate, Tales From Turnpike House is the seventh album from British trio Saint Etienne, and is rumoured to be their last. Should that be the case, it’s a final album to be proud of; a near-perfect encapsulation of the band’s sophisticated yet twee electro-pop aesthetic. Tales From Turnpike House is slickly produced yet warmly accessible, deftly balancing the trio’s devotion to 1960’s pop music with a cooler, minimalist approach to contemporary electronica. The inclusion of guest vocals from David Essex on ‘Relocate’ may cross the line from ironic to excruciating, but this stumble aside, the album doesn’t miss a step.

The fourth album from post-rock quartet Sigur Rós is simultaneously more vigorous and less bleak than its predecessor, 2002’s ( ), adopting a range of moods and speeds in comparison to ( )’s sustained, glacial pace. Takk… (‘Thanks’ in Icelandic) recalls the best moments of their 2000 breakthrough album Agaetis Byrjun, although this new album witnesses the angelic falsetto of vocalist Jon Thor Birgisson emoting in English instead of his invented language of Hopelandish. Highlights include the crashing grandeur of ‘Glossoli’, the yearning ‘Andvari’ (featuring Icelandic string quartet Amina) and the vibrant, breathtaking ‘Soeglópur’. There’s also an almost-comic brass section on offer, not to mention numerous moments of transcendent, tear-inducing beauty.

Just because a band’s music appears on the soundtrack of teen drama The OC is no reason to dismiss them as trite or disposable, as this fifth album from US quartet Death Cab For Cutie so aptly demonstrates. It displays a mastery of mood and tone, although the band’s wistful and winsome indie-meets-emo style will not be to everyone’s taste, and Plans does sometimes veer too close to predictable to be entirely satisfying. Warm acoustic hooks and sunny production counterbalance vocalist Ben Gibbard’s penchant for angst, although the second half of the album sees a reliance on keyboards in an unsuccessful attempt to camouflage some weaker arrangements. Although not as strong as their previous album Transatlanticism, Plans is still endearing, engaging, and only sometimes too earnest.

All these reviews have appeared in my weekly column in MCV over the last month or so.
Posted by richardwatts at 9:00 pm

oky, hi
you've been tagged:
tell us 20 things about yourself, then tag 5 others and spread the tag love...

Twenty things? Ok, that's gonna be challenging but fun! Thanks for the tag!

Hey thanks RW, you've confirmed a few music purchases for me here. Look out Polyester!